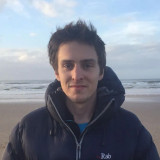 Rowing across the Atlantic Ocean

During my cycling trip around Australia in 2013, when I was lost in the middle of the desert, I met a Ralph. A Dutch man who was cycling across Australia on a rowing bike. He told me he was going to row across the Indian Ocean from Australia to Africa. I didn't believe him until I saw photos of his previous rowing expeditions across the Atlantic Ocean and the Pacific Ocean. 3 years later, I looked him up and found out he was now organizing team expeditions to row across the Atlantic Ocean. I contacted him on the spot. I told him I had never rowed a day in my life. I don't have any ocean/sea experience. But I'm used to getting out of my comfort zone and pushing my limits. He accepted me. Departure planned in 6 months. We got a team 4 adventurers from 4 different countries. We're going to row day and night, 2 hours on / 2 hours off. From Portugal to French Guiana. Aiming to break the World Record under 50 days.